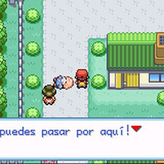 Go green and choose Bulbasaur as your starting Pokemon in this fun Pokemon adventure game! Enjoy your favorite game in your local Spanish dialect and language in Pokemon Verde Hoja!

Pokemon Verde Hoja is the Spanish localization version of the very popular Pokemon Leaf Green. Released back in 2004, Pokemon Leaf Green was an enhanced remake of one of the most popular Pokemon RPGs Pokemon Red and Blue. The game features the same gameplay as the Pokemon Leaf Green English version but with names and language changed to their Spanish counterpart. Will you be able to capture all the strong Pokemon and create a strong well-rounded party to defeat all the other Pokemon trainers and become the next champion? Good luck and have fun!

There have been 27 likes from 28 votes on this game.

Play Pokemon Verde Hoja game online in your browser free of charge on Arcade Spot. Pokemon Verde Hoja is a high quality game that works in all major modern web browsers. This online game is part of the Adventure, Strategy, GBA, and Pokemon gaming categories. Pokemon Verde Hoja has 27 likes from 28 user ratings. If you enjoy this game then also play games Pokemon Fire Red Version and Pokemon Emerald Version. Arcade Spot brings you the best games without downloading and a fun gaming experience on your computers, mobile phones, and tablets. New arcade games and the most popular free online games are added every day to the site.