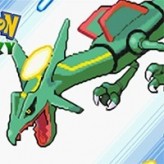 Come to a land filled with many mysteries of the legendary Pokemons and discover a portal between two worlds in this fan-made Pokemon hack – Pokemon Flora Sky! Catch all Pokemons from Generation IV and V and be the new hero of the land!

Pokemon Flora Sky is a fan-made hack of Pokemon Emerald version. After the battle between Dialga and Palkia, a portal between the world of Giratina and the real world was torn open. You must close the portal before it’s too late. Prevent Team Magma and Team Aqua from further disrupting the balance of the world and help calm down the two legendary Pokemons Groudon and Kyogre! Pokemon Flora Sky also features new events, new HMs, new mini games, new moves, and so much more!

Play Pokemon Flora Sky game online in your browser free of charge on Arcade Spot. Pokemon Flora Sky is a high quality game that works in all major modern web browsers. This online game is part of the Adventure, Strategy, GBA, and Pokemon gaming categories. Pokemon Flora Sky has 6 likes from 6 user ratings. If you enjoy this game then also play games Pokemon Fire Red Version and Pokemon Emerald Version. Arcade Spot brings you the best games without downloading and a fun gaming experience on your computers, mobile phones, and tablets. New arcade games and the most popular free online games are added every day to the site.