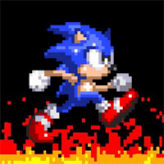 Speed is the key in Sonic Burned Edition. Sonic just defeated Dr. Eggman and wants to make sure that it is all over. Help Sonic complete all levels once again.

As our hero is busy, Dr. Eggman returns to his old base to plan to conquer the world. Chaos Emeralds were so yesterday. It’s the Flame Emeralds this time. Seven powerful stones that control anything fire relate the evil doctor opens a portal and gets them. Starting at Green Hill, he tried to open a portal to take hold of the gem. Little that he knows, a gem came flying toward him and burned the island to a crisp. A 2D platformer, Sonic Burned edition, brings you the same levels of previous Sonic games with the addition of a fire theme. Continue collecting rings to protect yourself from the hazards of each zone. Avoid falling in bottomless pits, hit a spike, and all collected rings will be dropped. You can pick them up, but you have to be quick, or they will disappear forever. Sonic still has two of his famous moves. A running move to move from one gap to another, and a roll attack to destroy Dr. Eggman’s minions. Boss fights and bonus levels are still present for you to collect more rings for power-ups such as invincibility and additional lives. Our Blue Blur would stop at nothing to stop the world from being reduced to ash.

There have been 51 likes from 56 votes on this game.

Play Sonic Burned Edition game online in your browser free of charge on Arcade Spot. Sonic Burned Edition is a high quality game that works in all major modern web browsers. This online game is part of the Adventure, Arcade, Emulator, and SEGA gaming categories. Sonic Burned Edition has 51 likes from 56 user ratings. If you enjoy this game then also play games Sonic Mania Edition and Sonic 3 Complete. Arcade Spot brings you the best games without downloading and a fun gaming experience on your computers, mobile phones, and tablets. New arcade games and the most popular free online games are added every day to the site.