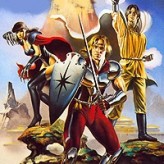 Lead a group of adventurers and save your home planet Motavia and the whole solar system in this classic RPG adventure – Phantasy Star IV! Fight your enemies in a turn-based combat system and be a part of this grand adventure!

Phantasy Star IV (also called Phantasy Star: The End of the Millennium) is the fourth and final game in the Phantasy Star series for the Sega Genesis console. The game features a well animated enemies, memorable sountrack, anime-art style, a challenging journey, and a wonderful story that makes this game one of the top-notch JRPG for the SEGA Genesis console. The game also introduced new features to its series including skill and technique combination, a new manga-style narrative, and much more.

Play Phantasy Star IV game online in your browser free of charge on Arcade Spot. Phantasy Star IV is a high quality game that works in all major modern web browsers. This online game is part of the Adventure, Strategy, Emulator, and SEGA gaming categories. Phantasy Star IV has 4 likes from 4 user ratings. If you enjoy this game then also play games Phantasy Star and Phantasy Star II. Arcade Spot brings you the best games without downloading and a fun gaming experience on your computers, mobile phones, and tablets. New arcade games and the most popular free online games are added every day to the site.