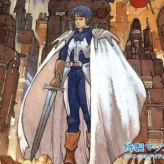 Dark Force returned and Mother Brain began to malfunction! Take control of Rolf and his friends as they investigate this new crisis in Phantasy Star II! Defeat various biomonsters, meet up with Lutz, and destroy Dark Force once and for all in this popular Japanese role playing game!

Phantasy Star II is a classic 1989 role playing video game developed by Sega for the Sega Genesis Console. The game is similar to the previous title, allowing players to control and command four players in a turn-based battle. However, unlike the original title, Phantasy Star II abandoned the first person view and replaced it with a top-down over-world perspective and third-person combat view. The game’s story follows the events of the first title, returning the game’s main protagonist and antagonist.

Play Phantasy Star II game online in your browser free of charge on Arcade Spot. Phantasy Star II is a high quality game that works in all major modern web browsers. This online game is part of the Adventure, Strategy, Emulator, and SEGA gaming categories. Phantasy Star II has 3 likes from 3 user ratings. If you enjoy this game then also play games Phantasy Star IV and Phantasy Star. Arcade Spot brings you the best games without downloading and a fun gaming experience on your computers, mobile phones, and tablets. New arcade games and the most popular free online games are added every day to the site.