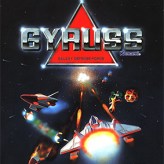 Fight against enemy spaceships and eliminate them all to complete a level in this old-school space shooter game! Avoid space hazards and complete your mission in Gyruss! Warp to a planet and eliminate all hostiles surrounding it.

Gyruss is a classic arcade space shoot ’em up game that allows the player to revolve around an implicit circle. Released in 1983 for the Nintendo Entertainment System (NES), the game is often considered to be a cross between Tempest and Galaga. In this game, the player’s goal is to warp from one planet to another and eliminate all hostile forces and enemy spaceships in the area in order to proceed to the next. There are also some other hazards like satellites, asteroids, and laser beam generators that you can avoid or destroy at will! Have fun!

Play Gyruss game online in your browser free of charge on Arcade Spot. Gyruss is a high quality game that works in all major modern web browsers. This online game is part of the Arcade, Shooting, Emulator, and NES gaming categories. Gyruss has 4 likes from 4 user ratings. If you enjoy this game then also play games Super Mario Bros. and Legend Of The Blob Brothers 2. Arcade Spot brings you the best games without downloading and a fun gaming experience on your computers, mobile phones, and tablets. New arcade games and the most popular free online games are added every day to the site.