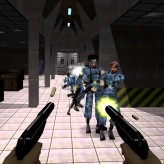 One of the greatest movies of all time got its own game! Play as James Bond and stealthily infiltrate a facility in 007: GoldenEye! Use an arsenal of weapons to complete your mission!

007: GoldenEye is a 3D first-person shooter game based on the James Bond film of the same name. The game was said to revolutionize the first-person shooters, raising the standards of the genre, and is one of the best FPS games for the Nintendo 64 (N64) gaming platform. Released in 1997, this game lets you take control of the secret agent, and a spy for England, James Bond. The game features very impressive AI for its time, a series of well-designed maps, highly detailed guns, and a cool storyline based on the movie.

There have been 11 likes from 17 votes on this game.

Play 007: GoldenEye game online in your browser free of charge on Arcade Spot. 007: GoldenEye is a high quality game that works in all major modern web browsers. This online game is part of the Arcade, Shooting, Emulator, and N64 gaming categories. 007: GoldenEye has 11 likes from 17 user ratings. If you enjoy this game then also play games 007: The World Is Not Enough and James Bond 007: The Duel. Arcade Spot brings you the best games without downloading and a fun gaming experience on your computers, mobile phones, and tablets. New arcade games and the most popular free online games are added every day to the site.