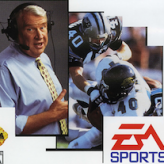 Get in the game and join the stars and licensed NFL players of the 1995 NFL season. Spike the ball and cover the receivers in Madden NFL 96! Create a new player and play various mini-games that will determine the player’s overall ability!

Madden NFL 96 is a football sports simulation video game following Madden NFL 95. The game was licensed by the NFL and features real-life players and teams. The game was the last game to be explicitly endorsed by the NFL on Fox and features many improvements from the previous game. The game also features a new “create-a-player” functionality that allows for the creation of an entirely new NFL player. The stats of the player will be determined by the overall results of the various mini-games and training sessions you will play.

Play Madden NFL 96 game online in your browser free of charge on Arcade Spot. Madden NFL 96 is a high quality game that works in all major modern web browsers. This online game is part of the Arcade, Sports, Emulator, and SNES gaming categories. Madden NFL 96 has 2 likes from 2 user ratings. If you enjoy this game then also play games Madden NFL 07 and Madden NFL 2005. Arcade Spot brings you the best games without downloading and a fun gaming experience on your computers, mobile phones, and tablets. New arcade games and the most popular free online games are added every day to the site.