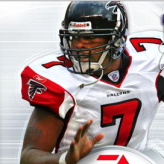 Two hands in the air, Touchdown! Madden NFL 2004, the fifteenth installment on the series. Featuring Michael Vick. Michael Vick was the Atlanta Falcons Quarterback in 2004, an overpowered character due to his ninety-five rating, which was fixed in the later versions of the game. A sports simulator can now enjoy the bone-crushing tackles, endzone passes, and exciting plays that the sport is known for. Owner Mode is introduced in this game, from regulating food at venues, team relocation, and surrounding your team with the best staff that the sport has to offer. You can even set ticket prizes, reward players for good performance, and boost them to win that championship. With a Hip hop and Rock songs in the background, it is for sure for you to be pumped and chest-bumping in no time. A Playmaker feature is also added to the game and runs the offense's chains by adjusting before the snap. Direct receivers in their routes during a scramble and direct blocking if you decide to score independently. On defense, you can read and react to the offense and deliver that tackle that can be heard from here to the endzone, with thirty-two official licensed teams and new animations and enhancements. Madden NFL 2004, Run shotgun on every play or watch as you dance on the other team's zero-yard line!

Play Madden NFL 2004 game online in your browser free of charge on Arcade Spot. Madden NFL 2004 is a high quality game that works in all major modern web browsers. This online game is part of the Strategy, Sports, Emulator, and GBA gaming categories. Madden NFL 2004 has 9 likes from 9 user ratings. If you enjoy this game then also play games Madden NFL 07 and Madden NFL 2005. Arcade Spot brings you the best games without downloading and a fun gaming experience on your computers, mobile phones, and tablets. New arcade games and the most popular free online games are added every day to the site.