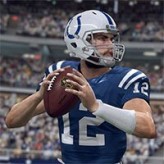 Create your very own football team and defeat all the other teams! Choose the best strategic gameplay for both offense and defense in Madden NFL 2002! Play the GameBoy Advance version of the Madden NFL 2002! Choose or create your own team and enter the world tournament.

Madden NFL 2002 was the first football simulation game to feature the expansion team, the Houston Texans in the team select. This game allows you to create your own teams and players from scratch. Madden NFL 2002 features more realistic player animations, Madden Cards, a training mode, and a lot of other features. Get ready to play American football and defeat all the other teams in season games or the world tournament.

Play Madden NFL 2002 game online in your browser free of charge on Arcade Spot. Madden NFL 2002 is a high quality game that works in all major modern web browsers. This online game is part of the Arcade, Strategy, Emulator, and GBA gaming categories. If you enjoy this game then also play games Madden NFL 07 and Madden NFL 2005. Arcade Spot brings you the best games without downloading and a fun gaming experience on your computers, mobile phones, and tablets. New arcade games and the most popular free online games are added every day to the site.