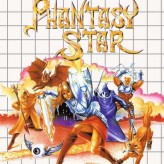 Play as one of the very first female protagonists in the history of gaming, Alis Landale, and trek into the Solar system in Phantasy Star! Travel across the vastness of space, in the Solar System of Algol, in order to defeat the evil tyrant, Lassic!

Phantasy Star is a popular role-playing video game released back in 1987 for the Sega Master System gaming console. The game was the very first installment of the renowned series and is considered as one of the pioneers for RPG. The game features a turn-based combat, advanced 8-bit graphics, and a cool story-driven gameplay. Phantasy Star spawned numerous sequels and spinoffs afterward due to its solid gameplay that was well received by the masses. Have fun!

Play Phantasy Star game online in your browser free of charge on Arcade Spot. Phantasy Star is a high quality game that works in all major modern web browsers. This online game is part of the Arcade, Strategy, Emulator, and SEGA Master System gaming categories. Phantasy Star has 1 likes from 1 user ratings. If you enjoy this game then also play games Phantasy Star IV and Phantasy Star II. Arcade Spot brings you the best games without downloading and a fun gaming experience on your computers, mobile phones, and tablets. New arcade games and the most popular free online games are added every day to the site.