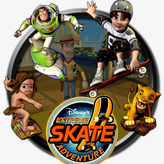 Tired of the usual games you play? Check out this skateboarding game entitled Disney’s Extreme Skate Adventure. A combination of a fantasy world and your realistic game style of skateboarding that you can play in different modes.

Disney’s Extreme Skate Adventure uses the same game engine as Tony Hawk’s Pro Skater 4 which was released last 2003. This game features the Disney worlds of Toy Story, The Lion King, and Tarzan. Each Disney character you pick has its own world with different story lines that you can play at your satisfaction. Complete multiple quests while performing various tricks with unique styles to earn higher points as you advance in the game. In the original Game Boy Advance cartridge, you can also play with friends in Versus mode and check out who has sleeker skills. Game on!