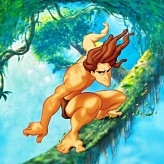 Do you wanna be the king of the jungle and swing over vines and climb mountains? Do you wanna go adventuring in a vast jungle full of wild animals? If you do, check out this fun-filled adventure side-scrolling platformer game – Disney’s Tarzan!

Disney’s Tarzan is an adventure side-scrolling platformer game released for the Nintendo Game Boy Color (GBC) gaming platform in the year 1999. The game lets you play as an orphan child who was adopted and raised by gorillas for several years until adulthood. The game has fourteen (14) different levels that progress through time where at the beginning of the game, you will play as the young Tarzan who progresses levels by learning different skills from the gorillas such as climbing trees, swinging down branches or fighting small and aggressive wild animals like snakes. Witness the jungle hero as he eventually grows up.

Play Disney's Tarzan game online in your browser free of charge on Arcade Spot. Disney's Tarzan is a high quality game that works in all major modern web browsers. This online game is part of the Action, Platform, Anime, and GBC gaming categories. Disney's Tarzan has 2 likes from 2 user ratings. If you enjoy this game then also play games Disney's Lion King 1 1/2 and Disney's Extreme Skate Adventure. Arcade Spot brings you the best games without downloading and a fun gaming experience on your computers, mobile phones, and tablets. New arcade games and the most popular free online games are added every day to the site.