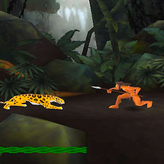 Surf on trees, swim in swamps, swing on vines, race mine carts down dark caves, and become the King of the Jungle in this action-platformer game – Disney’s Tarzan: Return to the Jungle!

Disney’s Tarzan: Return to the Jungle is an action-platformer game released for the GBA in the year 2002 as a sequel for Tarzan, released for the GBC. The game lets you play as Tarzan in an all-new adventure. Prepare for perilous encounters with hungry wild animals, tough hunters, and the evil Queen La. Interact with NPCs, discover evil pirate ships, abandoned mining caves, and the ancient Lost Valley of the Dinosaurs as you explore 21 wild environments! Use your weapons and animal call to help you on your adventure! Enjoy!

Play Disney's Tarzan game online in your browser free of charge on Arcade Spot. Disney's Tarzan is a high quality game that works in all major modern web browsers. This online game is part of the Adventure, Platform, Emulator, and N64 gaming categories. Disney's Tarzan has 3 likes from 3 user ratings. If you enjoy this game then also play games Disney's Lion King 1 1/2 and Disney's Extreme Skate Adventure. Arcade Spot brings you the best games without downloading and a fun gaming experience on your computers, mobile phones, and tablets. New arcade games and the most popular free online games are added every day to the site.