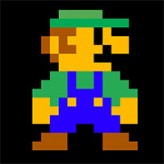 Give love to Luigi and play his very own game! Save the princess as Mario’s brother in this NES ROM hack – Super Luigi Bros.! Enjoy the new graphics and awesome innovative power-ups exclusively for Luigi.

Super Luigi Bros. is retro ROM hack of the game Super Mario Bros. In this game, you will take the lead as Luigi and play on dozens of remixed levels from the Super Mario Bros. 2 and Super Mario Bros. Special. In this game, all the coin blocks now feature the commemorative 30th-anniversary badge! Despite the game being dedicated solely for Luigi, Mario still managed to sneak in somehow! Enjoy the platformer game once again in an all-new perspective! Relive the classic a whole new way and have fun!

Play Super Luigi Bros. game online in your browser free of charge on Arcade Spot. Super Luigi Bros. is a high quality game that works in all major modern web browsers. This online game is part of the Arcade, Retro, NES, and Mario gaming categories. Super Luigi Bros. has 85 likes from 104 user ratings. If you enjoy this game then also play games Super Mario Bros. and Super Mario 64. Arcade Spot brings you the best games without downloading and a fun gaming experience on your computers, mobile phones, and tablets. New arcade games and the most popular free online games are added every day to the site.