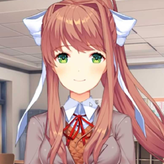 Go on a horrific and heart-rending journey with Sayori, Monika, Yuri, and Natsuki. Doki Doki Literature Club is a 2D psychological horror visual novel game that breaks the fourth wall.

Doki Doki Literature Club is a 2D visual novel game developed by Team Salvato and was released back in September 2017. This downloadable indie game is unique as it features characters, events, and scenarios that break the fourth wall - that is when the characters of the game interact with the players directly, rather than the player's avatar. The game primarily consists of four main characters that the player can interact. Each character has a different role, personality, and characteristics. The game starts like any other romantic dating simulation and visual novel, but would later turn creepy and disturbing - revealing its psychological horror theme. Be warned, the game itself contains suicide, self-harm, mentions of depression, and graphic images of death. Because of this, the game is not ideal for the weak-hearted players and not recommended for children or people who are sensitive and are easily disturbed. The game features multiple endings depending on the decisions the player has made throughout the game. At some point, the player may want to intervene directly with the game files. Will you be able to witness and unlock all three possible ending scenarios?