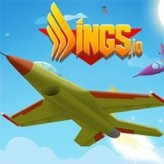 Get on a massive dog fight and shoot down the planes of other players in this massively multiplayer online arcade game Wings.io! Control a plane and complete one simple mission: Take down as many player planes as you can before going down!

Wings.io is a massive multiplayer arcade shooting game where you take control of a plane and go on a massive dog fight with hundreds of real time players. In this game, you will be thrown inside the battlefield filled with hundreds of players and your goal is to shoot down as many as you can before going down. Collect weapons and kill everything that go pass your wings! Show no mercy for they will show none to you!

Wings.io is currently at BETA stage. If the server is down, try again after a few minutes.

Play Wings.io game online in your browser free of charge on Arcade Spot. Wings.io is a high quality game that works in all major modern web browsers. This online game is part of the Arcade, Multiplayer, Challenge, and IO gaming categories. Wings.io has 2 likes from 2 user ratings. If you enjoy this game then also play games Bonk.io and Slither.io. Arcade Spot brings you the best games without downloading and a fun gaming experience on your computers, mobile phones, and tablets. New arcade games and the most popular free online games are added every day to the site.