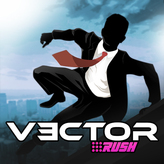 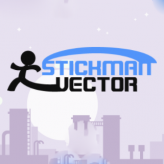 An unexpected calamity is about to destroy the city! Avoid the various obstacles ahead and start running for your life in this thrilling running game - Vector Rush. Will you be able to make it out alive?

Released back in May 2021, Vector Rush is a parkour-running platformer game where you take control of a nameless office guy trying to escape the horrible earthquake by running on top of rooftops and jumping from building to building. The goal of the game is to make it to the checkpoint without getting knocked out by the obstacles, falling off the buildings, or get hit by the earthquake. Grab the collectibles along the way to get the three-star rating on the level.

The game features a total of fifteen levels, and each level is increasingly more challenging than the last. This game is inspired by the game called Vector from Nekki and showcases similar features to that game. You can use the coins you've earned to purchase tricks and stunts. There is a total of six tricks you can unlock. Will you be able to collect them all?

Tip: When playing on a computer or laptop, it is easier to use the keyboard arrow keys rather than swiping the screen with the mouse.

Play Vector Rush game online in your browser free of charge on Arcade Spot. Vector Rush is a high quality game that works in all major modern web browsers. This online game is part of the Action, Running, Mobile, and Challenge gaming categories. Vector Rush has 1 likes from 1 user ratings. If you enjoy this game then also play games Vectorman and Vectorman 2. Arcade Spot brings you the best games without downloading and a fun gaming experience on your computers, mobile phones, and tablets. New arcade games and the most popular free online games are added every day to the site.