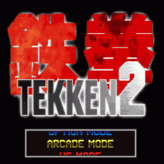 Choose one of the skillful martial arts fighters and be a part of the King of the Iron Fist tournament in this fighting game – Tekken 2! Learn the moves and combos and defeat all your opponents!

Tekken 2 is a classic fighting game released back in 1996 for various gaming consoles including the Super Nintendo Entertainment System (SNES). The game features 16 characters from the previous game including the iconic Heihachi Mishima, Kazuya Mishima, King I, Kuma I, Kunimitsu, Lee Chaolan, and Yoshimitsu. The game takes place two years after the events of the King of Iron Fist Tournament and features a new tournament to play. Will you be able to lead your chosen character to become the next Iron Fist champion? Good luck and have fun!

Play Tekken 2 game online in your browser free of charge on Arcade Spot. Tekken 2 is a high quality game that works in all major modern web browsers. This online game is part of the Arcade, Action, Emulator, and SNES gaming categories. Tekken 2 has 6 likes from 7 user ratings. If you enjoy this game then also play games Tekken 3 and Tekken Advance. Arcade Spot brings you the best games without downloading and a fun gaming experience on your computers, mobile phones, and tablets. New arcade games and the most popular free online games are added every day to the site.