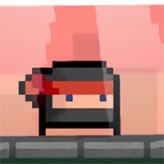 Unleash the deadly art of slime-jutsu and eliminate as many slimes as you can. Throw shurikens and go on a slime killing spree in Super Slime Smash! Eliminate multiple enemies in a row and achieve the bigger score. Try to unlock all achievements and complete all challenges and become the best slime-fighting ninja in the land.

Super Slime Smash is a fun avoid and destroy arcade game where you take control of a bad-ass pixelated ninja. The world is filled with slimes and your goal is to eliminate as many slimes as you can and survive for as long as you can while avoiding rockets and missiles. How many slime enemies will you be able to defeat before finally giving up? Good luck and have fun!

Play Super Slime Smash game online in your browser free of charge on Arcade Spot. Super Slime Smash is a high quality game that works in all major modern web browsers. This online game is part of the Arcade, Skill, and Challenge gaming categories. Super Slime Smash has 1 likes from 1 user ratings. If you enjoy this game then also play games Super Mario Bros. and Super Mario 64. Arcade Spot brings you the best games without downloading and a fun gaming experience on your computers, mobile phones, and tablets. New arcade games and the most popular free online games are added every day to the site.