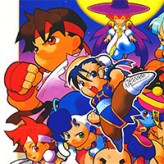 Imagined a world where all Capcom heroes fight together and against each other! Make your wildest dreams come true in this action-filled arcade fighting game - Super Gem Fighter Mini Mix!

Super Gem Fighter Mini Mix, also known as Pocket Fighter in other countries is a Japanese children's fighting video game released by Capcom for the CPS II arcade system in the year 1997. The game is a collaboration of Capcom's best games, namely, Street Fighter, Darkstalkers, and Red Earth. The roster includes characters from the Street Fighter games like Ryu, Ken, Chun-li and many more! Characters Morrigan, Felicia, and Hsien-Ko from Darkstalkers are also playable, and Tessa from the Red Earth games. It also features many character cameos from other Capcom games on some of the stages' backgrounds such as Balrog, Demitri, and many more. The game has two secret characters, can you unlock them? Good luck.