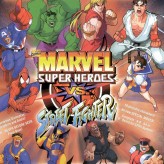 Marvel Super Heroes vs Street Fighter is the second installment in the Marvel vs. Capcom series of 2D fighting games. The game features a tag-team battle style system where characters from the Marvel and Street Fighter universe collide in a fight for domination. The game features a total of 17 characters to choose from including many villains from their respective series like Blackheart from Marvel, and Zangief from Street Fighter. Choose your character and create the ultimate tag team to battle all the others in the arcade mode! Good luck and have fun!