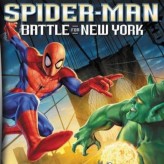 Beat your enemies down using Spider-man or Green Goblin in Spider-Man: Battle for New York. Punch and kick the enemies you will encounter in New York City! Control each character in different levels until both characters will cross path.

Spider-Man: Battle for New York is an action platform video game released for Game Boy Advance (GBA) in 2006. The video game is loosely based on the world of a comic book series Ultimate Spider-Man. In this game, you will control of our spider superhero and his nemesis Green Goblin to take on different missions every level. There are almost 20 levels in the game and you will control Green Goblin half of the game. To the confusion of many, the first playable character in this game is not Spiderman himself.