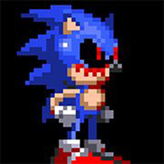 Play as the creepypasta character known only as Sonic.EXE and run through various levels collect rings and your victims' souls in Sonic.EXE Sadness! Dash your way through the blood-filled levels and claim the souls of antagonists and protagonists alike!

Sonic.EXE Sadness is a hack of the SEGA game Sonic the Hedgehog. The game features the evil sonic incarnate as the main character. The game not only features different graphics, sprites, and creepy audio, it also features more challenging level layouts, new game mechanics, and so much more. Will you be able to complete all levels as the evil Sonic.EXE? Will you be able to secure the souls of the innocent? Good luck and have fun!

P.S. Unlike the original Sonic.EXE game, this game plays more like the traditional Sonic games.

Play Sonic.EXE Sadness game online in your browser free of charge on Arcade Spot. Sonic.EXE Sadness is a high quality game that works in all major modern web browsers. This online game is part of the Platform, Miscellaneous, Emulator, and SEGA gaming categories. Sonic.EXE Sadness has 153 likes from 179 user ratings. If you enjoy this game then also play games Sonic.Exe: Nightmare Beginning and Sonic Mania Edition. Arcade Spot brings you the best games without downloading and a fun gaming experience on your computers, mobile phones, and tablets. New arcade games and the most popular free online games are added every day to the site.