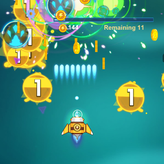 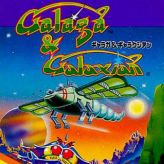 Arcade games comeback in no better fashion, so sink your blasters in Galaga & Galaxian. A shooting game that involves destroying the formation of aliens and avoiding one of their kamikaze dives to destroy you.

Nostalgic? You cannot even begin. You are fixed at the bottom of the screen, shoot and blast your way through alien invaders. Control the galaxy as you clear each round of aliens. Formations are made on top of the screen with two escort ships. While shooting, enemies will try a suicidal dive and swipe the player. Galaxian flagship and Galboss would make an appearance, ratcheting the excitement in-game. With one shot on screen, the player needs to wait before shooting another. As they divebomb you, shoot all three of them, and you will get bonus points with extra ones awarded for destroying the big bad one. Levels increase the difficulty as more enemies show up, and the rate of fire increase. Flags at the bottom of the screen show you the number of levels you have gone. Created by Kazunori Sawano, banking on the popularity of another arcade game, invaders. Simple and easy to play, the loop will have you addicted in no time. One of the best games to compete with a popular arcade shooter, pilot the battleship, and have the controls ready. We are the galaxians, and our mission is to destroy all aliens.

Play Galaga & Galaxian game online in your browser free of charge on Arcade Spot. Galaga & Galaxian is a high quality game that works in all major modern web browsers. This online game is part of the Arcade, Shooting, Emulator, and GB gaming categories. Galaga & Galaxian has 8 likes from 9 user ratings. If you enjoy this game then also play games Galaga and Galaga. Arcade Spot brings you the best games without downloading and a fun gaming experience on your computers, mobile phones, and tablets. New arcade games and the most popular free online games are added every day to the site.