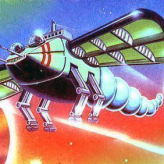 Go retro tonight and play the classic arcade shooter Galaxian all night long. Shoot down the invading aliens with your hi-tech space ship in this old-school arcade. How long will you be able to delay your inevitable defeat against the endless swarm of alien invaders? Good luck and have fun trying to win the highest score.

Galaxian is a classic retro-shooter video game that was developed and published by Namco, and was released back in 1979 for the Nintendo Entertainment System (NES). The game was released back-to-back with the more popular Galaga. However, Galaxian was developed and released earlier and has fewer features than its more popular brother, which is the game's successful sequel. Gameplay-wise, Galaxian is relatively simple. The player takes control of a space ship found at the bottom of the screen. A group of aliens, in a convenient array, will slowly descend downward, and the player's goal is to shoot down all alien lifeforms before they get to touch the bottom of the screen where the player's ship is located. After defeating a swarm of alien, the group will then be replaced by another batch with even more aggressive ships and tougher hulls. The game repeats the cycle until the player can no longer protect the ship.

There have been 11 likes from 14 votes on this game.

Play Galaxian game online in your browser free of charge on Arcade Spot. Galaxian is a high quality game that works in all major modern web browsers. This online game is part of the Arcade, Shooting, Emulator, and NES gaming categories. Galaxian has 11 likes from 14 user ratings. If you enjoy this game then also play games Galaga & Galaxian and Super Mario Bros.. Arcade Spot brings you the best games without downloading and a fun gaming experience on your computers, mobile phones, and tablets. New arcade games and the most popular free online games are added every day to the site.