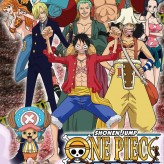 Follow the adventures of Monkey D. Luffy as they explore the East Blue Sea! Join the Straw Hat Pirate Crew and find the famed treasure – One Piece! Fight pirates, marines, and henchmen, and defeat their bosses.

One Piece (or Shonen Jump’s – One Piece) is an action-packed fighting game based on the very popular and long-running Anime series of the same name. The game covers the whole of the Anime’s the East Blue Saga starting from the Romance Dawn Arc to the end of the Loguetown Arc. Use Luffy’s stretchy gum gum abilities and join him in his quest to become the ultimate King of the Pirates. Luffy starts with a variety of moves and techniques, but as the game progresses, he will learn more moves and expand his arsenal to better deal with new enemies.

There have been 19 likes from 25 votes on this game.

Play One Piece game online in your browser free of charge on Arcade Spot. One Piece is a high quality game that works in all major modern web browsers. This online game is part of the Adventure, Action, GBA, and Anime gaming categories. One Piece has 19 likes from 25 user ratings. If you enjoy this game then also play games LEGO Indiana Jones Game and One Punch Man. Arcade Spot brings you the best games without downloading and a fun gaming experience on your computers, mobile phones, and tablets. New arcade games and the most popular free online games are added every day to the site.