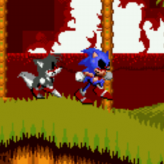 Dive into the darkness and embrace your evil side as you play as the evil Sonic EXE once again in this SEGA ROM hack - Sonic 2 EXE! Bring your sidekick and try to collect as many golden rings as you can and complete one act after another to reach and defeat Dr. Eggman and claim his soul.

Sonic 2 EXE is a ROM hack of Sonic the Hedgehog 2 and is a continuation of the very first Sonic EXE hack. This game is a sequel to the first hack and features the return of the evil incarnate Sonic Exe, as well as the soul-deprived Tails who became evil as well. The player will take control of the evil Sonic and will have the evil Tails follow the player around.

The game features similar gameplay to the original Sonic game. The traditional sidescrolling running platformer gameplay remains the same, but this hack features new sprites and graphics. The game's main character, Sonic, was replaced by Sonic Exe sprite, while the side character Tails was also replaced by a much evil counterpart. In this hack, the sky is turned to crimson and water into blood. The game's overall aura and theme were also changed to be more sinister. This ROM hack also features many minor changes that include change in sound effects, minor level layout edits, and much more. Will you be able to complete another round of Sonic the Hedgehog 2 while playing as the evil Sonic Exe? Good luck and have fun!

There have been 12 likes from 12 votes on this game.

Play Sonic 2 EXE game online in your browser free of charge on Arcade Spot. Sonic 2 EXE is a high quality game that works in all major modern web browsers. This online game is part of the Arcade, Running, Emulator, and SEGA gaming categories. Sonic 2 EXE has 12 likes from 12 user ratings. If you enjoy this game then also play games Sonic 3 Complete and Sonic Mania Edition. Arcade Spot brings you the best games without downloading and a fun gaming experience on your computers, mobile phones, and tablets. New arcade games and the most popular free online games are added every day to the site.