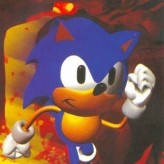 Sonic Blast is a sidescroller that brings back our blue hero. Sonic must stop Dr. Robotnik from collecting the Chaos Emeralds to strengthen his base.

As Sonic, you must run and jump to reach the end of the level while defeating enemies and collecting rings. Bonus Stages also make an appearance, which would give you shards of the Chaos Emerald. In addition to Sonic’s spinning attack, double jump now gives you the ability to chain jumps mid-air. This will allow you to access areas that contain more rings. And like any other Sonic game, Sonic Blast focuses on collecting rings for protection. Collect ten rings, and this will serve as your health. Bump into an enemy, and they will all scatter, but the hope is not yet lost as you can collect them before they disappear. The number of rings appears at the upper left-hand side of the screen. Lives are also given to Sonic, and the player loses them by being crushed, drowning, and falling in a pit. TV monitors are hidden across levels and serve as power-ups that give speed, shields, and extra lives. These monitors also save as the save point for progress. Having trouble finishing? Hit that Signpost to signal the conclusion of the game. Choose between Sonic or Knuckles and stop Dr. Robotnik in his evil schemes! The controller is the one that unifies the chaos!

Play Sonic Blast game online in your browser free of charge on Arcade Spot. Sonic Blast is a high quality game that works in all major modern web browsers. This online game is part of the Arcade, Action, Emulator, and SEGA Master System gaming categories. Sonic Blast has 3 likes from 5 user ratings. If you enjoy this game then also play games Sonic 3 Complete and Sonic Mania Edition. Arcade Spot brings you the best games without downloading and a fun gaming experience on your computers, mobile phones, and tablets. New arcade games and the most popular free online games are added every day to the site.