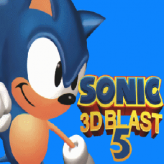 Speed up into this adventure, Retro style. Sonic 3D Blast 5 is an action-adventure game with catchy tunes and intuitive gameplay. Sonic returns in this platformer as he tries to stop Robotnik and save the world. A version of the popular Sonic 3D game from the Sega Genesis, be prepared for a one-color affair.

Not sparing any details in the game, go through the levels connecting coins and fighting enemies. Time and coins collected are on top of the screen to give you a sense of progress. Avoid spikes by jumping over them, hit them, and make sure that you have enough golden rings to continue. If you hit the spikes, collect all the rings that you lost, failing to do so would put you in danger of starting over. Use crabs to jump through inaccessible parts of the levels and go to the finish line with your spinning portrait. Battle giant crabs, bees, and other evil inventions as you prove that once and for all, that slow and steady does not always win the race. Levels are separated into zones, and the difficulty increases as you move farther along the game. Sonic 3D Blast 5 is an unusual take for the Blue speedster, but it is an adventure that waits to be enjoyed. Lace-up your sneakers, and don’t be afraid to show them that speed is your game.

Play Sonic 3D Blast 5 game online in your browser free of charge on Arcade Spot. Sonic 3D Blast 5 is a high quality game that works in all major modern web browsers. This online game is part of the Arcade, Retro, Emulator, and NES gaming categories. Sonic 3D Blast 5 has 5 likes from 6 user ratings. If you enjoy this game then also play games Sonic 3 Complete and Sonic Mania Edition. Arcade Spot brings you the best games without downloading and a fun gaming experience on your computers, mobile phones, and tablets. New arcade games and the most popular free online games are added every day to the site.