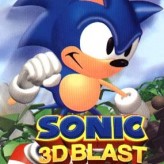 Doctor Robotnik discovered a bird species called Flickies and a way to exploit them for his evil plan! Stop him and protect the birds in Sonic 3D Blast! Play on a 3D world and foil Dr. Robotnik’s vile plot again!

Sonic 3D Blast (also known as Sonic 3D: Flickies’ Island) is a 2D isometric action-adventure game unlike your regular Sonic games. In this game, Sonic the Hedgehog must travel pn a pseudo-3D environments to collect tiny birds known as Flickies. The game features 7 zones, a final battle, and 7 additional special stages that are very complex. If you consider yourself a true Sonic fan, then you must play this game for the sake of playing it! Don’t forget to have fun!

Play Sonic 3D Blast game online in your browser free of charge on Arcade Spot. Sonic 3D Blast is a high quality game that works in all major modern web browsers. This online game is part of the Adventure, Arcade, Emulator, and SEGA gaming categories. Sonic 3D Blast has 16 likes from 18 user ratings. If you enjoy this game then also play games Sonic 3 Complete and Sonic Mania Edition. Arcade Spot brings you the best games without downloading and a fun gaming experience on your computers, mobile phones, and tablets. New arcade games and the most popular free online games are added every day to the site.