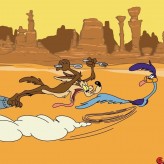 Take on the role of the fast-paced avian and overcome traps, obstacles, and challenges in this Looney Tunes game – Road Runner’s Death Valley Rally! Eat bird seeds and gain some additional speed!

Road Runner’s Death Valley Rally (also known as Looney Tunes: Road Runner) is a platformer running video game released back in 1992 for the Super Nintendo Entertainment System (SNES). The game is based on the Looney Tunes characters Wile E. Coyote and Road Runner. This side-scrolling platformer game features five different environments with a boss battle at the end of each one. In this game, you will take control of Road Runner and complete a series of levels and defeat Coyote who will constantly try to eat you. Mock the enemies by spamming “Beep! Beep!” and have fun!