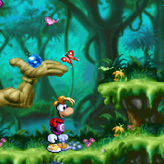 Travel across the Dream Forest, Band Land, Blue Mountains, and a lot more as you play as the heroic character Rayman in this fun platformer game.

Rayman is a classic platformer video game that was first released back in 1995 on various gaming consoles including the classic Atari Jaguar gaming console. The game features traditional side-scrolling platformer gameplay focused around the titular Rayman character. The game features a total of six worlds that the player can explore. Each world has its own theme. The goal of the game is to find and free all the caged Electoons, with one hidden inside each world. Will you be able to find all six cages before it’s too late? Good luck and have fun!

Play Rayman game online in your browser free of charge on Arcade Spot. Rayman is a high quality game that works in all major modern web browsers. This online game is part of the Arcade, Action, Emulator, and Atari Jaguar gaming categories. Rayman has 9 likes from 10 user ratings. If you enjoy this game then also play games Rayman 2 - The Great Escape and Rayman 3 - Hoodlum Havoc. Arcade Spot brings you the best games without downloading and a fun gaming experience on your computers, mobile phones, and tablets. New arcade games and the most popular free online games are added every day to the site.