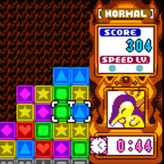 Collect Pokemon in a new way by playing this match-3 Tetris like puzzle game! Battle other trainers and unlock new Pokemons in Pokemon Puzzle Challenge! Duel against Gym Leaders in a head to head match and get a chance to fight the Elite Four!

Pokemon Puzzle Challenge (also known as Pokemon de Panepon in Japan) is a Pokemon-themed match-3 puzzle game based on the gameplay and mechanics of Tetris Attack and Panel de Pon. Characters in this game are from the Pokemon Gold and Silver games, while some are from the popular Pokemon anime itself. The game also features a variety of other game modes including Puzzle Mode, Time Zone, Marathon, Challenge, Line Clear and Garbage Mode! So what are you waiting for? Capture those Pokemons and have fun playing this unique Pokemon themed puzzle game.