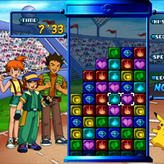 Join Ash Ketchum and his friends from the popular anime and clear blocks together with your favorite Pokemon in Pokemon Puzzle League! Play as Ash and join the official Puzzle League Tournament with Pikachu!

Pokemon Puzzle League is a puzzle game based on the popular animated series and franchise, Pokemon. The game was released back in the year 2000 exclusively for the Nintendo 64 gaming console. The game features gameplay akin to Panel de Pon, which is similar to Tetris, but with Pokemon elements and characters. Meet various characters from the anime in the tournament and eventually defeating all eight of the Kanto region rivals. Try to earn all the badges for yourself and have fun! Good luck in playing this cool Pokemon-themed puzzle game!

Play Pokemon Puzzle League game online in your browser free of charge on Arcade Spot. Pokemon Puzzle League is a high quality game that works in all major modern web browsers. This online game is part of the Puzzle, Strategy, Pokemon, and N64 gaming categories. Pokemon Puzzle League has 2 likes from 2 user ratings. If you enjoy this game then also play games Pokemon Fire Red Version and Pokemon Emerald Version. Arcade Spot brings you the best games without downloading and a fun gaming experience on your computers, mobile phones, and tablets. New arcade games and the most popular free online games are added every day to the site.