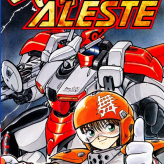 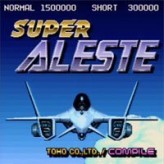 Take flight and burst those aliens into smithereens in this challenging and action packed vertical shooter arcade game – Super Aleste! Pick up power ups and change your weapon set to the style you want! Use the bomb and clear the screen from enemies and hostiles!

Super Aleste is a popular vertical shooter arcade video game, also known as Space Megaforce in the North America. In this game you will pilot a modern aircraft capable of changing fire system and mechanics mid air with the use of power ups. Your task is to get inside the enemy territory and obliterate their presence in the area to reclaim liberty. In this game, there are dozens of powerups that you can collect, each power up has their own level and firing set that will permanently change your way of firing unless you pickup another powerup. Look for a powerup that will make the current task easier and destroy as many aliens as you can! Shoot down incoming bullets and stay away from enemy fire!

Play Super Aleste game online in your browser free of charge on Arcade Spot. Super Aleste is a high quality game that works in all major modern web browsers. This online game is part of the Arcade, Shooting, Emulator, and SNES gaming categories. Super Aleste has 2 likes from 2 user ratings. If you enjoy this game then also play games Super Mario Bros. and Super Mario 64. Arcade Spot brings you the best games without downloading and a fun gaming experience on your computers, mobile phones, and tablets. New arcade games and the most popular free online games are added every day to the site.