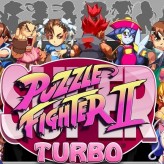 Super Puzzle Fighter II Turbo, also known as Super Puzzle Fighter II X, is a tile-matching fighting video game that was initially released back in 1996 for the arcade systems but was later ported to the Game Boy Advance (GBA) handheld gaming console. The game is a parody of the popular fighting game Super Street Fighter II Turbo, and features the same character as the game, but with different tile-matching puzzle gameplay. The game follows the gameplay and rules of the original Puyo Puyo 2 game with a little variation on the gameplay. The game features a total of eight Capcom characters, four from Street Fighter Franchise, while the remaining four from the Darkstalkers and Night Warriors franchise. The game also features a couple of hidden characters, will you be able to discover them all? Good luck!