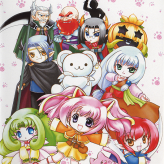 Tired of the old Tetris puzzle game? Then why not put an explosive twist to it in this cute arcade game called Pochi and Nyaa! Build up a high tower and create combos from the same colored blocks. Then detonate all the blocks before the enemy gets you first!

Pochi and Nyaa is a classic puzzle arcade published back in 2003. Although the game did not have a chance in the arcade, it features quite cute graphics and colorful vivid art. Similar to Tetris in a manner, in this game you line up as many blocks as you want then hit the detonator button. Detonate plenty enough blocks and some garbage blocks will fall on your opponent. The game is a bit tricky to master but is fun nonetheless.

Play Pochi and Nyaa game online in your browser free of charge on Arcade Spot. Pochi and Nyaa is a high quality game that works in all major modern web browsers. This online game is part of the Arcade, Puzzle, Emulator, and Neo Geo gaming categories. Pochi and Nyaa has 2 likes from 2 user ratings. If you enjoy this game then also play games Metal Slug and The King of Fighters '97. Arcade Spot brings you the best games without downloading and a fun gaming experience on your computers, mobile phones, and tablets. New arcade games and the most popular free online games are added every day to the site.