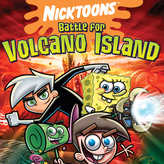 A series of misfortunes brought together the main characters from Nickelodeon! Play as your favorite character in Nicktoons: Battle for Volcano Island! Stop Mawgu from seeking revenge and rescue everyone from the Mawgu Ooze!

Nicktoons: Battle for Volcano Island is the sequel to the popular game Nicktoons Unite and followed by Nicktoons: Attack of the Toybots. When a ritual to defeat the evil Mawgu got interrupted, the nine heroes destined to defeat him were scattered! Play as Spongebob, Danny the Phantom, and the cast from the Fairly Oddparents and protect the volcano island from an all new villain named Mawgu! Rescue everyone from the Mawgu Ooze and complete the legend!