Nicktoons: Attack of the Toybots 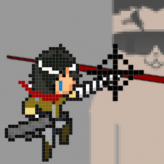 Play as your favorite Nickelodeon cartoon characte and take down the evil robots as they try to invade the world in Nicktoons: Attack of the Toybots! Play as Spongebob, Danny Phantom, and other popular characters as you try to stop Professor Calamitous’ evil robots!

Nicktoons: Attack of the Toybots is a 2007 Game Boy Advance (GBA) game that is a sequel to Nicktoons Unite and Nicktoons: battle for Volcano Island. The game features several playable characters from various TV Shows. When Professor Calamitous entered the game show “The Biggest Genius”, he stated that he can create robots that would be energized from krabby patties and ghost energies! After proceeding with this plans and abducting the main characters from various TV shows, who will be able to stop him? Play as one of the abducted heroes and try to escape and save the world! Have fun!