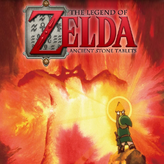 The popular Japanese-only Zelda game is finally here in full English! Join Link as he unravel the secrets of princess Zelda’s recurring nightmare in Legend of Zelda: Ancient Stone Tablets! Embark on an unlikely adventure in this classic SNES game.

Legend of Zelda: Ancient Stone Tablets (also called BS Zelda: Inishie no Sekibanin Japan) is a short game / mini adventure of the Legend of Zelda franchise. The game features four chapters separated into different games. Ancient Stone Tablets is the first chapter of the four and is set six years after the destruction of Ganon in the Link to the Past Zelda game. It’s the time of peace and yet Princess Zelda suffers from a recurring nightmare. A premonition of great evil that is to come.