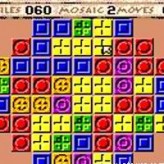 Play the classic puzzle game and start flipping all the colorful tiles! Complete all levels and master the game to dominate the board of Tesserae!

Tesserae is a classic single player puzzle video game that was first released back in 1990 for the Macintosh computer system but was later ported to Game Boy and Game Gear years later. The goal of this game is to remove the tiles in the board by flipping the colored tiles over other tiles. Every time you “jump” a tile, the tiles that was jumped from will be reduced by color, but the surrounding tile where it will land will be have added colors. The game starts pretty simple with only primary colored tiles but will later become much complex as secondary colored tiles will be introduced. Good luck!

Play Tesserae game online in your browser free of charge on Arcade Spot. Tesserae is a high quality game that works in all major modern web browsers. This online game is part of the Arcade, Puzzle, Emulator, and SEGA Game Gear gaming categories. If you enjoy this game then also play games Sonic Chaos and Sonic & Tails. Arcade Spot brings you the best games without downloading and a fun gaming experience on your computers, mobile phones, and tablets. New arcade games and the most popular free online games are added every day to the site.