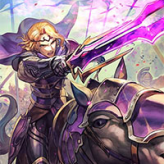 Explore the new continent of Blaine and be involved in the great war. Follow Siegfried and his son, Shon, as they fight against Magnus and his strong militaristic empire in Fire Emblem: The Last Promise!

Fire Emblem: The Last Promise is a popular hack of the game Fire Emblem for the Game Boy Advance (GBA) handheld gaming console. The game features a unique story held on a new continent called Blaine. The game focuses on the two main characters Siegfried, and Shon, as they take up arms to gather allies from all over the continent and do whatever it takes to stop the tyrannical Magnus from dominating the entire continent and the world. Do you have what it takes to follow the story through and through and come out victorious on every battle? Have fun!

There have been 40 likes from 42 votes on this game.