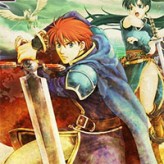 Take control of the heroes and lead your army to war in this medieval fantasy strategy role-playing video game – Fire Emblem: Blazing Sword! Marshall your forces and draw your steel in this awesome story-rich game filled with backstabbing and royal intrigue.

Fire Emblem: Blazing Sword (Also called “Fire Emblem: The Sword of Flame”, “Fire Emblem: Rekka no Ken”, or simply “Fire Emblem”) is a 2003 tactical role-playing video game released for the Game Boy Advance handheld system (GBA). The game is a prequel to Fire Emblem: Sealed Sword and is set on the same continent, 20 years prior to its predecessor’s events. As the 7th game in the Fire Emblem series, the game is divided into two segments focusing on two different characters.