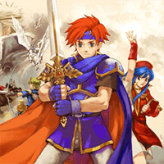 Dive into the continent of Elibe and take part in the war between six nations in this awesome Japanese Role Playing Game – Fire Emblem: Sealed Sword! Fight against other armies in a tactical turn-based combat and lead your warriors to victory!

Fire Emblem: Sealed Sword is a Japanese exclusive Fire Emblem game that also goes under the name of Fire Emblem: Binding BLade or Fuiin no Tsurugi or Fire Emblem: The Sword of the Seal. This game version is fully translated to English and is the sixth main game of the series (7th on the overall franchise). In this game, you can promote characters that reached a certain level to a new class to further enhance their ability. Lead a small group of units in to tactical battle as you try to get your hands on the Imperial Seal.