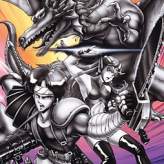 Lead a group of heroes and fight your way to the top of a mysterious tower and voyage through four fantastic worlds in this classic RPG – Final Fantasy Legend! Discover secrets and try to stay alive until the end of the quest!

Final Fantasy Legend is a classic 1989 black and white role playing game for the Game Boy hand held system and is the first game in the Saga series. In this game, a group of adventurers with you as the leader will journey to the top of a mysterious tower. As an RPG game at the time, this game was considered to be fairly difficult and challenging. In this game, money is really hard to earn and player upkeep is pretty high as it costs too much to have even one of your party members go down. Will you be able to beat this game and prove that you’re a hardcore RPG gamer?

Play Final Fantasy Legend game online in your browser free of charge on Arcade Spot. Final Fantasy Legend is a high quality game that works in all major modern web browsers. This online game is part of the Adventure, Strategy, Emulator, and GB gaming categories. Final Fantasy Legend has 3 likes from 3 user ratings. If you enjoy this game then also play games Final Fight and Dragonball GT: Final Bout. Arcade Spot brings you the best games without downloading and a fun gaming experience on your computers, mobile phones, and tablets. New arcade games and the most popular free online games are added every day to the site.