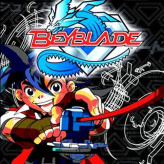 Unleash the beast hidden inside your rotating toy and let it explode with power! Join the tournament and use your Bey to defeat your opponents in this fun action-sports video game based on the anime - Beyblade.

Beyblade for PlayStation 1, or Beyblade: Let it Rip!, is an action video game released back in 2002. Developed by Wavedge and published by Crave, this game is highly based on the Japanese animated TV series of the same name. The game features tournament-style gameplay with some Role-Playing Elements. The game allows the player to take control of one of the anime's characters and use their Bey toy to fight, or create their very own custom character. Tournament mode is the game's main story mode and features 11 matches - most of which are against known characters from the anime such as Kai, Lee, Max, Michael, Ray, Robert, Tala, and Tyson. Do you have what it takes to become the tournament's champion?

Play Beyblade game online in your browser free of charge on Arcade Spot. Beyblade is a high quality game that works in all major modern web browsers. This online game is part of the Action, RPG, Anime, and PlayStation 1 gaming categories. Beyblade has 134 likes from 160 user ratings. If you enjoy this game then also play games Beyblade G-Revolution and Beyblade: Metal Fusion. Arcade Spot brings you the best games without downloading and a fun gaming experience on your computers, mobile phones, and tablets. New arcade games and the most popular free online games are added every day to the site.