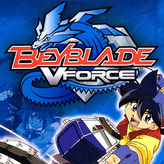 Shoot your Beyblade across the 3D world and try to get your fancy spinning top to the finish line! Defeat other Beyblades and release your inner beast in Beyblade VForce – Ultimate Blader Jam! Pump up your Beast meter by timing your initial spin or by defeating other players as you go.

There have been 60 likes from 67 votes on this game.