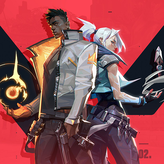 Pick an agent and blow your targets to smithereens! Use your unique skills to dominate the arena in this fantastic multiplayer tactical shooter - Valorant! Unlock new heroes and master your game style to climb up the rankings. Riot Games publish Valorant on June 2nd, 2020.

Valorant puts you in a Five versus five death-match as the last man standing raises their teams’ flag at the end. Shoot your way to victory with the quirky animations combined with realistic gunplay. Start on your side of the match and eliminate the enemy team. With the same controls as CS: GO, most players will feel at home in this futuristic shooter. Characters are separated into four classes, Duelists who are the main damage dealers of the team. Initiators, players who like gathering information and push through objectives. Sentinels literally defenders and protect the team. And Controllers who offer support for the Group. Plant or Detonate, it’s your choice. All players start with a knife that makes them run faster than withholding a gun. At the start of the game, the player can buy or sell to upgrade their killing arsenal, buy for a teammate, or penny-pinch if the next round will clinch the battle for them. With Seventeen guns to choose from, each agent will get a primary weapon slot and a secondary weapon slot. Players can wreak havoc with the right tool in their arsenal. Buy shields to increase your chances of surviving. Four maps are already included in the game (Haven, Bind, Split, and Ascent).

Play Valorant game online in your browser free of charge on Arcade Spot. Valorant is a high quality game that works in all major modern web browsers. This online game is part of the Multiplayer, Shooting, Action, and Download gaming categories. Valorant has 6 likes from 8 user ratings. If you enjoy this game then also play games Baldi's Basics and Yandere Simulator. Arcade Spot brings you the best games without downloading and a fun gaming experience on your computers, mobile phones, and tablets. New arcade games and the most popular free online games are added every day to the site.