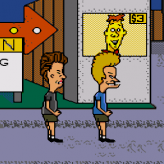 Join the moronic duo as they try to find the tickets to attend the GWAR concert! Travel all the way from school to prison in Beavis and Butt-Head! Find items, look for objects, and find a way to get the two guys to join the gang.

Beavis and Butt-Head is an action platformer video game released back in 1994 based on the MTV animation TV series of the same name. In this game, two simple (somehow idiotic) guys want to join a gang. But first, the two must release the gang’s leader from prison. In this game, the player takes the role of one of two guys as they eagerly travel all the way from the school to prison.

Play Beavis and Butt-Head game online in your browser free of charge on Arcade Spot. Beavis and Butt-Head is a high quality game that works in all major modern web browsers. This online game is part of the Adventure, Arcade, SEGA, and Anime gaming categories. Beavis and Butt-Head has 4 likes from 4 user ratings. If you enjoy this game then also play games Super Smash Flash 2 and Friday Night Funkin’ + Hatsune Miku. Arcade Spot brings you the best games without downloading and a fun gaming experience on your computers, mobile phones, and tablets. New arcade games and the most popular free online games are added every day to the site.